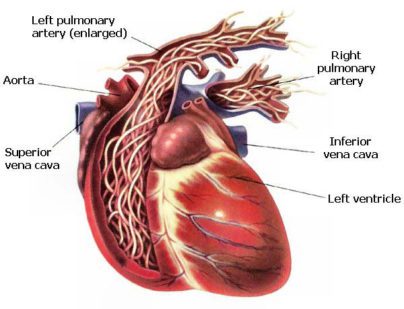 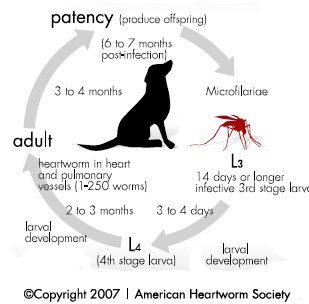 Heartworm disease is a serious and potentially fatal condition caused by parasitic worms living in the arteries that take blood from the heart to the lungs and the right side of the heart. Pictured is an illustration of what this looks like in a canine heart. Heartworm disease has been reported in all 50 states; however, the southeastern United States is where the vast majority of heartworm positive cases are reported. Therefore, any dogs not on heartworm prevention in Louisiana are at a very high risk of contracting the disease.

The majority of heartworm positive dogs do not have clinical signs. This is because testing is performed yearly and typically cases are diagnosed early in the course of the disease. When clinical signs exist, coughing and/or exercise intolerance are most commonly observed. As the disease progresses patients begin to lose weight, become more lethargic, can sometimes faint or collapse, and can even develop right-sided congestive heart failure. Right-sided congestive heart failure typically causes fluid accumulation within the abdomen or within the skin and jugular vein distention. The most severe and life threatening cases are at the “end-stage” of the disease, which we refer to as caval syndrome. In caval syndrome the patient will typically have discolored urine, a heart murmur, right-sided and possibly left-sided congestive heart failure, and rapid or difficulty breathing. Most patients in caval syndrome do not survive.

Treatment for heartworm disease consists of a series of injections, with a medication called Melarsomine, given in the lower back muscles. There are two options: either a two-injection series or three-injection series. The primary difference between them is the safety, effectiveness, time-frame, and cost. Regardless of the option chosen we recommend that all patients treated be started on Proheart 6 for heartworm prevention at minimum one month prior to beginning treatment.

With the two injection series patients receive one injection on two consecutive days. They receive the first injection on the morning they arrive, spend the night, and then receive the second injection the following morning. Following the injections the patients return in two weeks for a heart and lung check, and again two weeks after that (four weeks post-treatment) for microfilariacide, which is treatment given by mouth to ensure that all baby heartworms are killed. Once this is completed the patient is finished with treatment and will be retested for heartworms one year post treatment.

The two-injection series is considered less effective mainly because the patient will only be receiving two injections as opposed to three; and therefore, there is greater risk that all the heartworms will not be killed. Because a two-injection series is given all at once it causes a more rapid killing of the heartworms and this could result in a clot to form from dead or dying heartworms in the arteries. A clot formation can be life threatening. In addition, the injections are hard on the patient’s body/heart and in some patients the quick administration of Melarsomine can be very taxing and possibly life threatening. That being said; we have had equal success with both the two and three injection series, and we very rarely have had complications associated with either treatment protocol. Since the two injection series requires that one less injection be given it is less expensive than the three injection series.

With the three-injection series patients receive one injection and then return one month later to receive their next two injections, which are given on two consecutive days. Following the final injection patients return in two weeks for a heart and lung check and then again two weeks after that (four weeks post final injection) for microfilariacide, which is treatment given by mouth to ensure that all baby heartworms are killed. Once this is completed the patient is finished with treatment and will be retested for heartworms one year post treatment.

A crucial step in a successful treatment of heartworm disease is the care given after treatment is completed. It is extremely important that patient’s activity be strictly regulated/restricted for 6-8 weeks after each injection. This means that patients should only be leach walked outside and should never be able to run freely. This also may mean that when leaving your home your pet may have to be confined to a cage or a room to prevent excessive activity. This is important because if the heart starts beating too fast and hard it can “throw a clot” of dead worms, which can be life-threatening. After treatment patients will also be prescribed steroid tablets to help reduce inflammation associated with the disease and with the treatment.

It is important to note that even when treatment is performed (no matter which protocol) patients can experience clinical signs such as coughing. This is because with heartworm disease there is a degree of permanent damage that occurs in the lungs. Many times this manifests itself as a patient who is completely healthy and normal, but when beginning excessive exercise or activity will begin coughing and even gagging. If this occurs then it is recommended to pause activity and allow patient to rest before starting again.